Joey Moi, a native of Tumbler Ridge, British Columbia, has sent fresh sounds spinning through Country radio’s airwaves as the producer behind Republic Nashville duo Florida Georgia Line‘s debut album, Here’s To The Good Times, including their smash hit single “Cruise.” The musical juggernaut spent 24 weeks atop the Soundscan Hot Country Songs chart, the longest stay for any song in the chart’s 69-year history. Moi was also one of the producers behind Jake Owen’s Barefoot Blue Jean Night and the producer behind his latest project, Days of Gold, which releases Dec. 3 on RCA Nashville. The Barefoot Blue Jean Night project garnered the chart-toppers “Anywhere With You,” “Alone With You,” “The One That Got Away” and the title track, which earned Owen his first No. 1 single.

Prior to his Country music success, Moi ascended from engineering to co-producing albums for rock band Nickelback, including projects The Long Road and Dark Horse. While attending CDIS School of Engineering and Sound in Vancouver, a classmate of Moi’s lived with members of Nickelback, who, at the time, had just completed a five-song EP and “were getting the 11 p.m. spin on the local rock station,” according to Moi. He did janitorial and security work at school, and was paid in free studio time. He used the time to record and engineer with Nickelback. “I could use the school studio between midnight and 8 a.m., so we would make demos until eight in the morning,” says Moi. “They were hard-working guys and gave everyone the opportunity to earn a spot. If you worked hard, they embraced that. It was obviously huge for my career.”

MusicRow: How did you first become involved in the music industry?
Joey Moi: I had a co-op program in high school. I was really into the technical side of stuff, all the consoles and the gear. They sent me down to Vancouver to a couple of recording studios, then to a small Country radio station, where they had me editing. Everything was reel-to-reel. The music director would scratch off songs he didn’t want anymore. This was right around the time that [Alan Jackson’s] “Chattahoochee” came out. That song was huge, but eventually, he would scratch off a song. I’d have to go through the stack of reels, find the song, cut them out and tape the reel back together. It was great training for getting into production, because I learned Country radio at the same time I was learning to record in a studio. At that age, I had no idea it would prepare me for what I do now.

MR: When did you discover your talent for crafting songs?
JM: That happened later in the Nickelback records. I had always been in the room while they wrote songs. I picked up rhyme scheme and alliteration and internal rhyme scheme, all those songwriting 101 skills. Once I got on the same page, I was able to make suggestions. We would write and produce it at the same time. Now I’ve come full circle. There was a two-year period of my life where all I did was write songs. For the past two years, I’ve produced songs, which is great. I would eventually love to write more.

MR: In October 2010, you signed a publishing agreement with Big Loud Shirt. How did you begin working with people in Nashville?
JM: I always loved a good literal lyric and that was something you found in Country music. In Vancouver, Chad [Kroeger] from Nickelback and I produced a guy in a band called Default. As Default kind of hit a wall creatively, and all those guys moved on, the singer and I talked about doing a Country album for him. My manager hooked us up with co-writes in Nashville. We came down here for two weeks and wrote with everybody. We met Seth England and Craig Wiseman, Rodney Clawson and all these guys, and wrote with other guys, too, like Tom Douglas. We got to know everyone through that album process.

At the time, I was looking for a publishing deal. I liked stuff about the publishing deal here better than what was happening out of New York or Los Angeles; they had longer, more aggressive deals and I wanted something more low-key. It just worked out to be a perfect fit.

MR: Talk about the process of producing Florida Georgia Line’s smash hit, “Cruise.”
JM: Part of the development process we did with FGL was to implement ‘better is better.’ Just because the song is written, doesn’t mean it can’t be re-written. In Vancouver, when we would write a song, we would go into the studio, start from scratch, and re-write. Nothing is sacred. The process I come from is very different from Nashville, where normally you get your song, go into the studio, have the band play it and move on. You don’t sit in the studio and re-write it. We wanted Brian [Kelley] and Tyler [Hubbard] to embrace the re-writing process, and they completely did. They took the leap of faith immediately. We added parts and revised things on “Cruise.” It was one of those cosmic days where it really worked. There was good creativity flowing.

MR: Thanks to iTunes, Shazam and other technology, single sales are booming again. How does that affect you as an album producer?
JM: I make CDs for a living and I haven’t bought a CD in like 10 years. You can Shazam and whatever the app is and buy it right there. It’s definitely made us take the approach that if you want someone to buy the entire album, you should have an album’s worth of songs that sound like singles. Then people will buy the whole thing, in theory. I find we do fewer album cuts or artistic songs. We spend time pointing everything at radio, which is I assume pointing to a larger kind of audience. That’s the theory. It doesn’t work every time. You do it a million times and one hits. 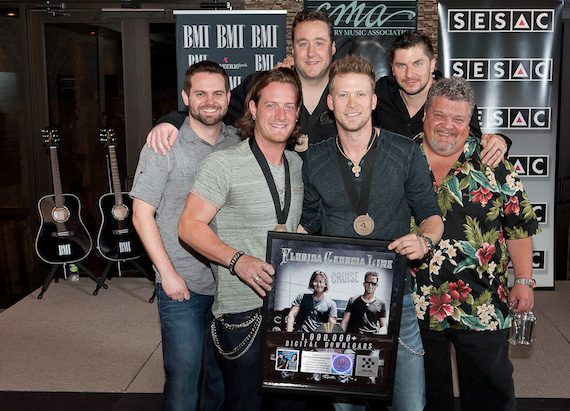 MR: What is the biggest difference in producing a band or duo, vs. producing a solo artist?
JM: In a band scenario, you are managing the creativity of four or five different people. Some people are really creative and others aren’t as creative. Some are strong musicians; others, not as strong. You try to make sure everyone feels like they have been completely involved in the album process. Normally, you don’t come out of that victorious. That’s the nature of working with bands.

Solo artists, for example, with Jake Owen, we picked the songs, recorded the tracks and he sang the songs. He’s very easy-going with things. Not often does Jake come in and say, ‘I don’t like this at all.’ He’ll hear a track we’ve built up with his scratch vocal on it, come in the studio and bang it out, and he’s happy. [Florida Georgia Line’s] Brian and Tyler are more involved in the writing, so it’s important to find moments for each of them vocally. You have to find the big moments for Brian and the big moments for Tyler, and make it work to help brand them as a duo.

MR: Jake Owen already had two albums out before Barefoot Blue Jean Night was released [in 2011]. What was your approach with that album and with Days of Gold?
JM: Jake’s such a good singer, but we needed to brand Jake in a way. He has a special gift with his voice. He sings effortlessly. The best way to answer that is for him to find those songs that accent his voice. Coming from my background, we take a very rock approach to making records. On Jake’s first stuff we did, we did a standard Nashville session where you hire all the badass players in town, but I came back and did an additional overdub session. We built the tracks layer by layer—you obsess with every harmony vocal, every drum fill and groove and every lick. That turned out to be a unique sound that we created for Jake.

At the last second, “Barefoot Blue Jean Night” came in. That song was risky, because it was a foreign production model for Country radio. It showed up late and we had spent so much of the budget that we couldn’t get back into a studio and hire a band the traditional way. We built it out of loops. We literally had like $3,000 left in the budget to make the last song. We hired two musicians. I was using my Pro Tools editor and singing background vocals. Rodney [Clawson]came and sang the harmonies on it. We slapped it together and it’s the biggest song of his career so far.

MR: What has been the biggest difference between the album-making process in Vancouver, and the process in Nashville?
JM: We had our own studio and would work on a record until it was done. Here, it is the city of protocol. You’ve got three hours to get it done. That’s been an adjustment to get back on the clock, but of all the cities I’ve worked in, this feels like home.

MR: Florida Georgia Line’s debut album will get the deluxe repackage treatment on Here’s To The Good Times: This Is How We Roll, which releases Nov. 25. What can you tell us about this deluxe project?
JM: You can only put about 11 songs on a typical record, so there is always that one type of song you wanted to put on it, but you couldn’t include. Here, there’s an opportunity to do a ballad, to touch on some topics we haven’t addressed, and to add a little depth to their overall perception.